Andrews Kofi Cudjoe, a known member of the award winning music group Keche tied the knot over the weekend with Joana Gyan, the CEO of Golden Empire Legacy, the label under which the group is signed.

This came as a surprise to many as the duo were signed onto the label earlier this year in April. The traditional marriage took place at Dzorwulu Abease on 30th November, 2019.
The ceremony was attended by close friends and that from the industry.

Joana Gyan is the President of Golden Empire Legacy Limited, the mother company which houses Golden Empire Legacy label which signed the duo in a deal reported to be equivalent to UD$ 500,000.00 plus a three bedroom apartment and two Hyundai Avente for each member of the duo.

We wish the new love birds good luck and more success in life. 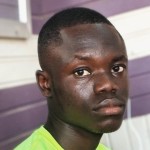 Exclusive: Get all the Latest Shatta Wale new songs here